From website of Peter Nothnagle
Recording at St. Bridget’s Church

Everyone involved in classical music knows the importance of performing in a suitable space. In my own experience, involving hundreds of recording sessions in all parts of the U.S. and several other countries, finding a recording venue for classical music is usually difficult. The requirements may seem simple, but it is almost impossible to find them all in a single location. These requirements are: a quiet, large, acoustically flattering room, which is available for several hours per day for several days, and is affordable.

Most recordings take place in churches and recital halls. Almost invariably, these places are difficult to schedule, and may be expensive to rent. Churches are usually located in cities and towns, where traffic noise is a problem, and there may be other activities that interfere with recording (a church preschool, a bell choir practice in a nearby room, and a paper-folding machine in the church office, to name three examples from recent experience). Churches often use recording rentals as a source of revenue, often $500 per day or more in urban areas.

Public concert venues, such as municipal and academic recital halls, are another option. Here, I have often found that a room that is quiet enough for live performance turns out not to be quiet enough for recording. There is invariably a ventilation system that runs continuously, and often it is not possible to shut it down only in the recital hall — it either runs for the entire college music building or not at all. Lighting systems often make noises. Emergency lighting and fire exit signs can make sounds, which may be unnoticed by a live performance audience, but are audible on a recording. It is sometimes impossible to persuade the building maintenance staff to disable these systems for a recording. Once the ventilation, lights, drinking fountains, and other noisemakers are dealt with, other mysterious sounds are revealed, that no one has noticed before. Also, these facilities are intended to be heavily used for rehearsals, classes, and performances, and it is difficult to schedule many hours per day for recording sessions, except during academic breaks. All too often, we have discovered that the person who schedules the recital hall is unaware of plans by the maintenance department, which have sometimes included e.g. painting lines in the parking lot or tearing off the roof. And again, sometimes the rental rates are prohibitive.

Commercial recording studios are quiet, may be reserved for large blocks of time, and their owners do not have to educated about the requirements of recording artists. However, any room designed principally for recording commercial music will be too small and acoustically “dead” to be satisfactory for classical music. Artificial reverberation will have to be added to the sound, which is never as pleasing as the “real thing”, and the musical performance will suffer from the dead environment. Again, rental cost may be an obstacle.

There are a few purpose-built facilities for classical music recording — Skywalker Ranch in northern California comes to mind — but although these rooms are very quiet and have wonderful acoustics, and the surroundings may be luxurious, the cost is very high — thousands of dollars per day.

Near my home in Iowa City, I have found another option. St. Bridget’s Church, a former Catholic church in rural Johnson County, offers an abundance of everything needed for classical music recording. It is located miles from the nearest town, on a side road that only serves nearby farms. There are almost no activities at the church except for recording sessions — no religious services, meetings, rehearsals, or concerts. It may be rented for days or even weeks on end, with 24-hour access. The rental is only $100 per day.

The room measures about 70 by 36 feet, with the ceiling rising to about 36 feet. The wood floor is partly carpeted, with unpadded wooden pews, which yields about two seconds of diffuse, uncolored reverberation. The building is constructed of brick and plaster, which contributes to the excellent acoustics: the massive walls reflect low frequency sound and keep it within the room, rather than lose it to the outside (which would be the case with lighter construction materials). 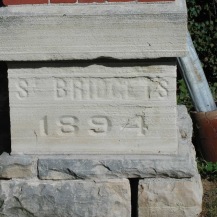